There's a lot of fun and cheap stuff at the big supermarkets for us outdoor nerds to botanize among. These days there's often a bigger variety of products and quality in these big stores focusing on everything from car parts to kitchen utilities. You often find higher quality products side by side with the stores own brands. This folding saw is a good example on this, it's the Biltema 16424 Folding Saw. A low price tag doesn't necessarily mean bad quality by default. Therefor I think it's interesting to also bring a cheap product like this to my field tests. If you want to see more about my latest field test on saws; click HERE. 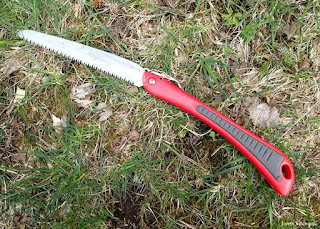 Biltema's folding saw is a big tool but the slim design makes it nice to handle and carry. The signal red color of the plastic handle makes the saw easy to find out in the bush. The handle's rubber inlays offer a good grip and a generous lanyard hole is to be found in the end of the handle. The long blade has no blade lock in folded position but if you now and then tighten the folding mechanism the friction keeps the blade folded during transport. The blade lock offer a very nice and tight in unfolded position. The Biltema lock is very similar to the locking mechanism seen on the Opinel No.18. 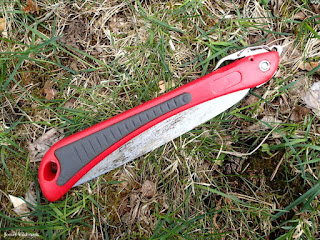 I've now been using this saw for six years and unfortunately I must say that the blade's cutting capacity has gotten less and less effective trough the years. This is most likely the result of this saw's low price. As far as I know I don't think Biltema offer spare parts for this product, too bad as the handle still are in pretty good shape. But on the other hand; today I can by a brand new Biltema saw for only 75 SEK. So even though this saw didn't put up much of a fight in my latest field test on saws; I think I've gotten a hole lot of saw for my money as I only gave 70 SEK for this saw back in 2008. 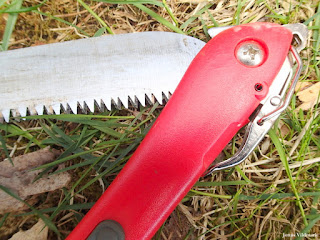