The dear F1:a has turned 20 and this has to be celebrated by adding the knife model into my bushcraft knife field test comparing 15 different robust forest knifes. You can see the test by clicking HERE. Let's first take a look at the past 20 years of this knife model's history and then the specs of the knife. 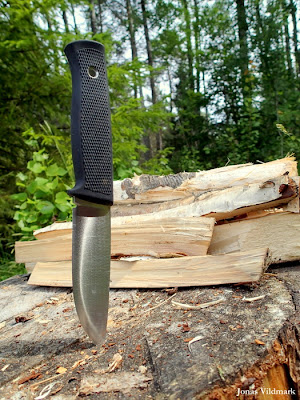 History
Back in 1995 the Swedish Pilot Survival Knife F1 was introduced as the Swedish Armed Force's official survival knife. The knife is a part of the air force project JAS 39 Gripen and in August 1995 the company Fällkniven AB delivered the first batch of F1 knives to the Swedish Forces. The family company Fällkniven has been offering knives to their costumers since 1984. Back then the products came from a number of high quality knife brands but in 1987 they started to develop their own knives. It took 8 years to develop the F1 and the model became the start of a world wide success for the humble company founded by Peter Hjortberger up in Norrbotten; the Swedish North. The knife has pretty much looked the same through the years besides some changes in materials and edge profile. The first version had a blade made of the steel ATS34, used the doule edge (flat grind) and was manufactured in Germany until 1997. After that the Japanese VG10 steel was introduced and the full tang was stretched out to protrude on the back of the handle. Three years later in 2000 the convex edge was introduced and in 2002 the laminated VG10 steel was introduced. Besides the laminated VG10 the F1 today also is offered with the more exclusive 3G steel and now in conjunction with the 20 year celebration Fällkniven also introduces a laminated cobalt steel. Today the company are offering a wide range of knife models in different size and shapes but it's still the F1 that's their bestseller. The knife's high quality and stamina now also has made it the official survival knife of the US Marines, US Navys and other special forces units in the world. 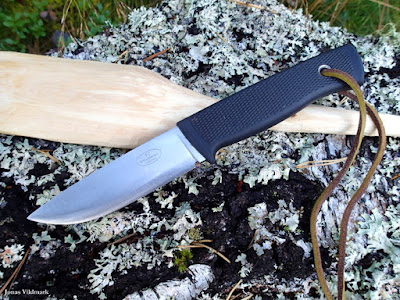 The F1's Design
The design of the F1 is a tasteful combination of old Scandinavian elegant knife culture and modern tactical robustness. The 100 mm long, 27 mm wide and 4,4 mm thick drop point blade has a hand shaped convex edge and is offered in three different stainless steels. A black coated version is also available using the material CeraCoat 8H. The knife has a full tang covered with the rubber material Thermorun. The fact that the tang not is fully visible is a nice feature in extremly cold condition saving any exposed skin from frostbite. The tang protrudes at the pommel to be used as a crusher or for hammering. The handle is only 16 mm thick and the knife weight is 148 g making the F1 a smooth and compact tool. The knife you see in these pics are made from the Japanese Hattori steel. The sandwiching of the laminate consist of a harder core of VG10 surrounded by the 420J2 steel. 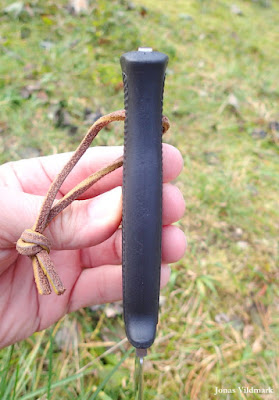 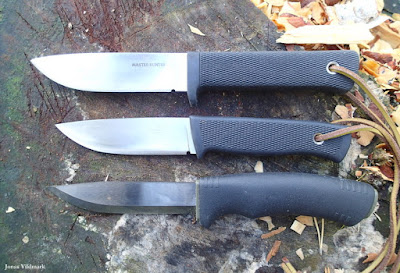 
Sheaths
The F1 comes with three different standard sheaths; covered leather (L), open leather (O) and zytel (Z). The F1's popularity has also generated a number of nice custom sheaths out there on the market. Personally I have one of each of the standard sheaths plus one self modified leather sheath; an open version of the covered leather. This means I got four different sheaths to pick from pending on my activity. The zytel sheath has gotten some complaints in different forums and this Fällkniven has listen to resulting in a updated sheath in the F1 Pro package also enabling MOLLE fittings. 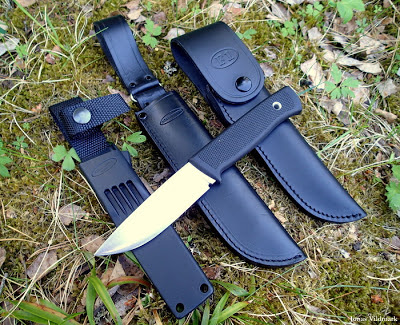 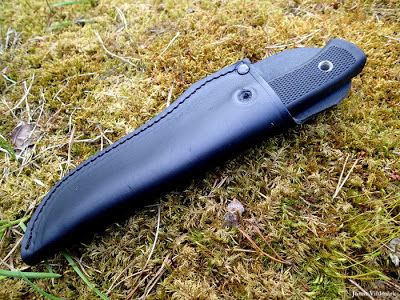 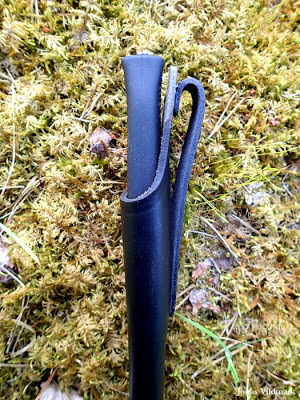 Exclusive Versions
Now and then more exclusive handmade versions of the F1 is offered. Right now a Green Micarta (gm) version is in production. Earlier a Maroon Micarta (mm) and a Ivory Micarta (im) was offered. These beautiful knives are made in limited editions and often end up as collectibles even if they absolutely have the capacity of being a great field knife.

Extreme Survival Knife and an OK Carver
I like the F1's balance and nice grip these features gives one a genuine feeling of quality and robustness. The steel holds an edge very well and in combination with a lanyard the convex edge also offers a pretty good small size chopper. The sharp spine edges works great on the ferro rod but hurts the helping thumb when whittling. The knife is a great hunting knife and although the very thick blade I think the F1 is an OK wood carver. The F1 ended up in a 5th place in my bushcraft knife field test compared to the 14 other test knives. The Swedish product F1 are something we should be very proud of here in Sweden. 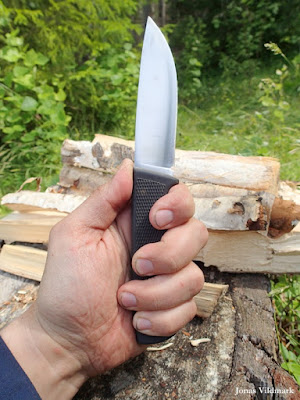 Also check out my magazine article on the F1 published inside Vapentidningen No.8 - 2015.
To see other posts I've written on Fällkniven's products; click HERE.